We’ve been big fans of Adam Carolla for years, back since his Loveline days. We’re confirmed radio junkies and we relate pretty well with Carolla’s tell-it-like-it-is style. Listening to Carolla, we’ve heard him talking about his homemade “Mangria” for the last five years.

Mangria was born one night when Carolla found himself with a half-glass of red wine. Carolla poured in some Vodka and tossed it in a blender with orange juice and some other fruit he had at his house. As it turns out, the stuff was pretty good. After years of talking about it, Carolla finally put it up for sale to the public.

We realized though that something was missing. What’s a brand new celebrity-released drink without it’s own custom portable bar?

BUT, it could have a custom portable bar and that just happens to be our thing. Of course, we had to do it big and give him custom LED lighting and branding artwork. We think it turned out pretty well and it looks like Adam’s crew feels the same: Mangria has been described as “a stiff drink that goes down easy” and “college in a bottle.” Doesn’t sound like a bad way to kick back and unwind. If you want to check out Mangria, you can pick some up online at http://carolladrinks.com/.

If on the other hand, you want an awesome looking portable bar. Check out our standard portable bar and professional portable bar. Both have four fully custombizable panels on the front, sides, and top and are available with LED lighting. 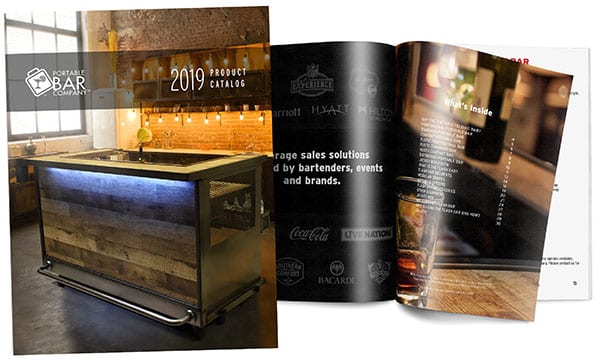